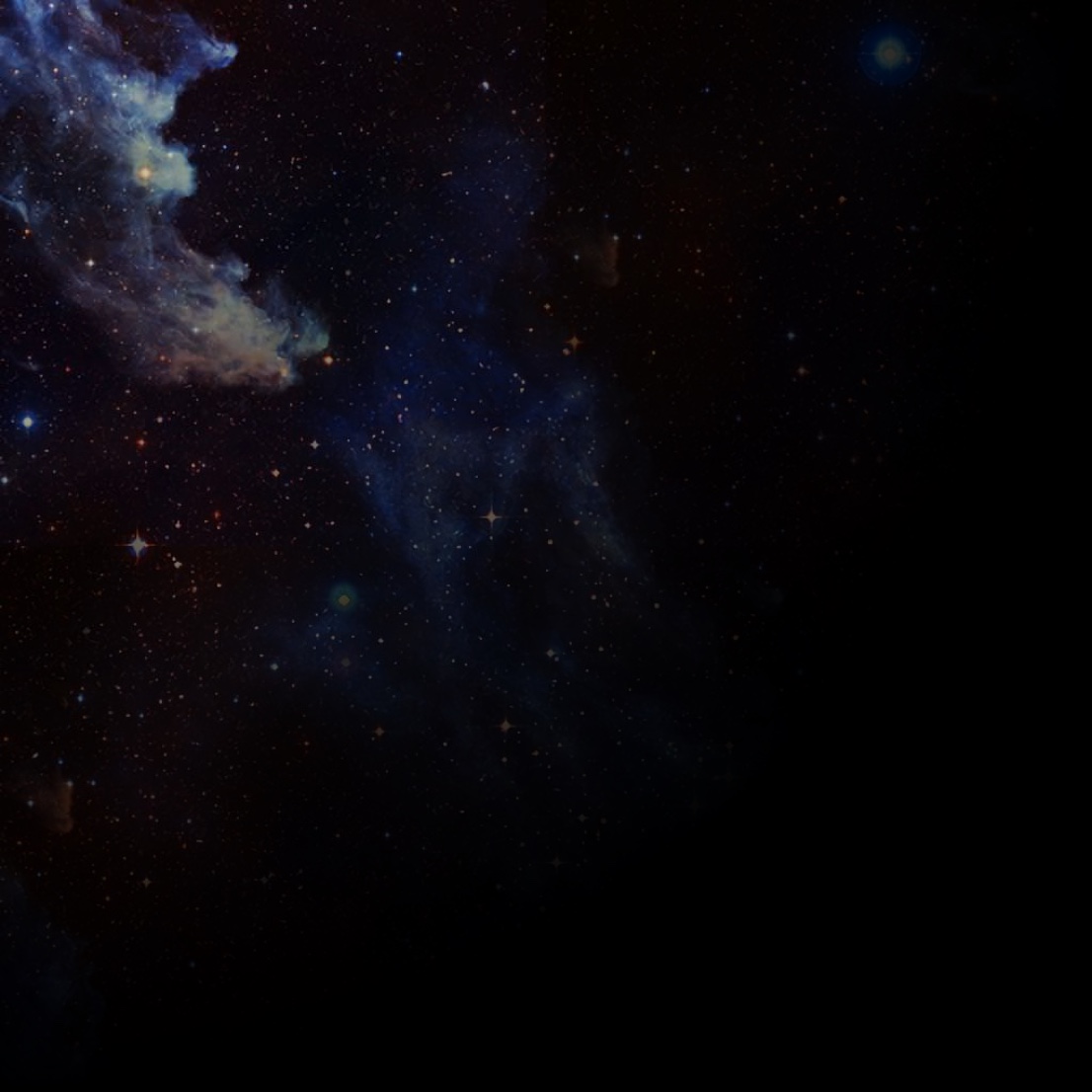 Go to The Coast

In this guide our subject is The Mud Flats, the fourth zone of act 1 which is known for making people run around the area searching for three Glyphs required to open the passageway to The Submerged Passage. Fortunately, there are somewhat fixed spawn points for these Glyphs that can be always be picked up in a way that minimizes backtracking.

There is a total of 6 distinct layouts for this area, or 3 depending how one wants to differentiate them. For the purpose of this guide, we will be separating them to 6 different layouts. You can deduct at least half of the possible layouts immediate upon entering based on the orientation of entrance, and later by the placements of the nests containing the glyphs.

While you can follow the little streams between the nests, they can sometimes lead you to a wall or to the river resulting in the need for backtracking for the other nests. Because of this reason, It's better to just learn the few different rulesets to follow depending the layout you are in, which is very fast to recognize.

Shown below are the two different starting orientations for this area:

Just by recognizing the starting orientation you can already deduct at least half of the possible layouts, so it's very useful to know.

If you were lucky enough to start with the down orientation, you now have to worry about 3 different layouts, which in this guide we refer to as:

The first and easiest layout of the down orientation Top layout, named based on the fact that we start at the top of the area, where you will very quickly notice that there is no way to go North at all, and you're very quickly pushed towards South or South-East if you kept going East. You can tell you're in the Top layout just from the fact that there is no walkable area generated North of the entrance.

Once you know the layout is Top, you simply go South and slightly tilted towards West, because sometimes if you go straight South you will end up on the middle nest which results in unnecessary backtack. It is also the best way to get the confirmation that there is a nest below the first one, because if the nest isn't there, it will be below the other nest. You know you've gone enough to West when you meet/pass a vertical line drawn from the entrance (black line in the image below) 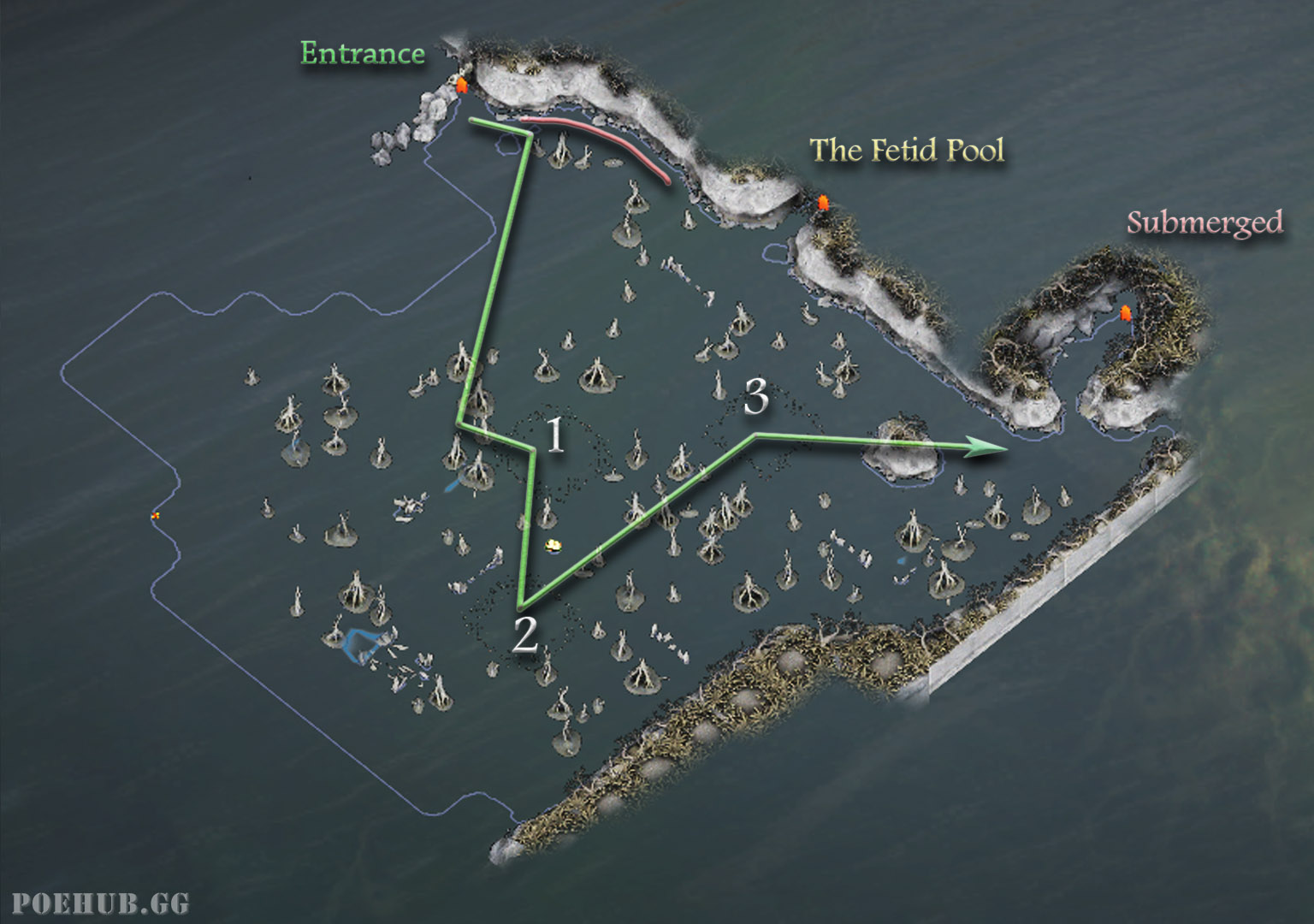 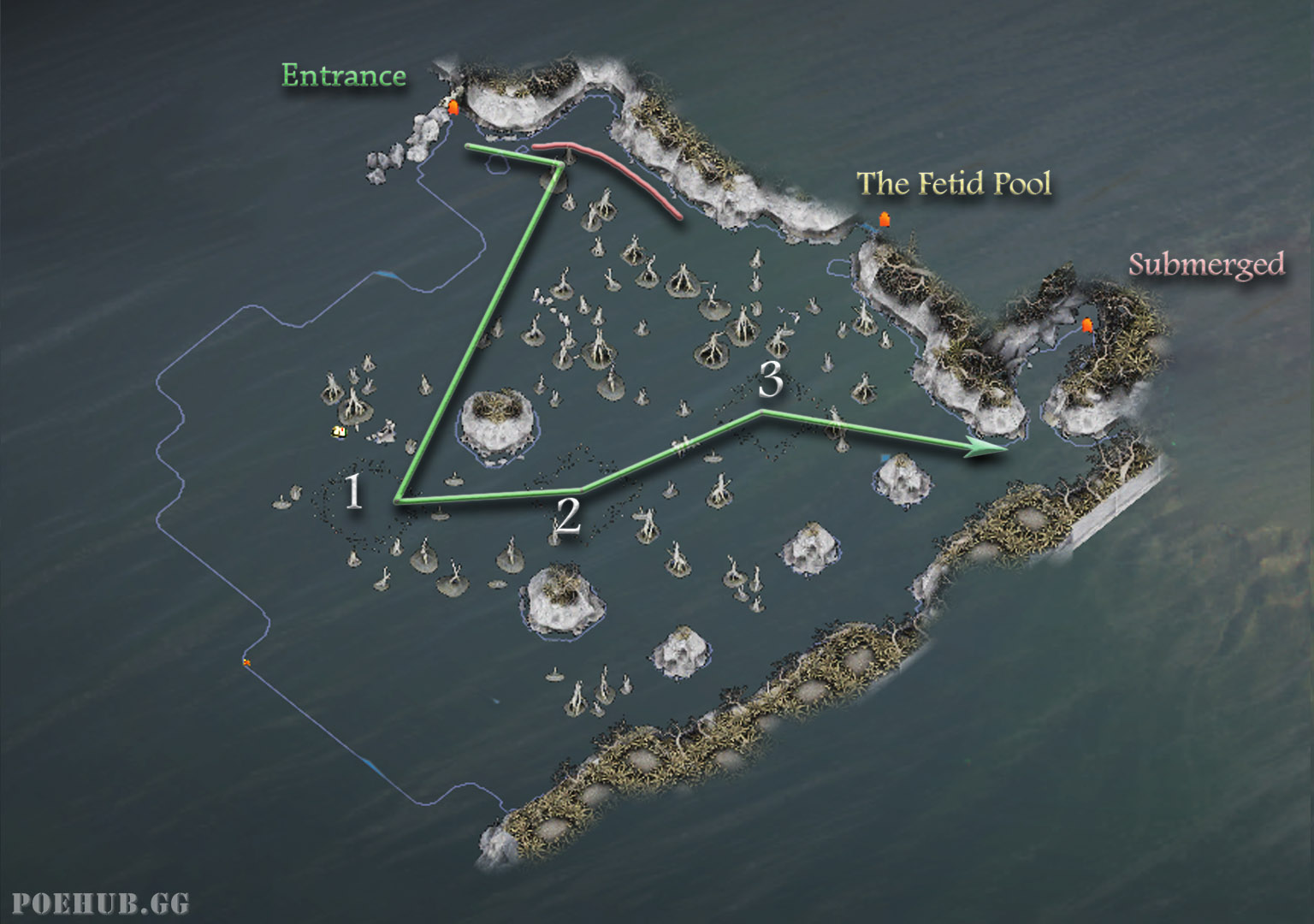 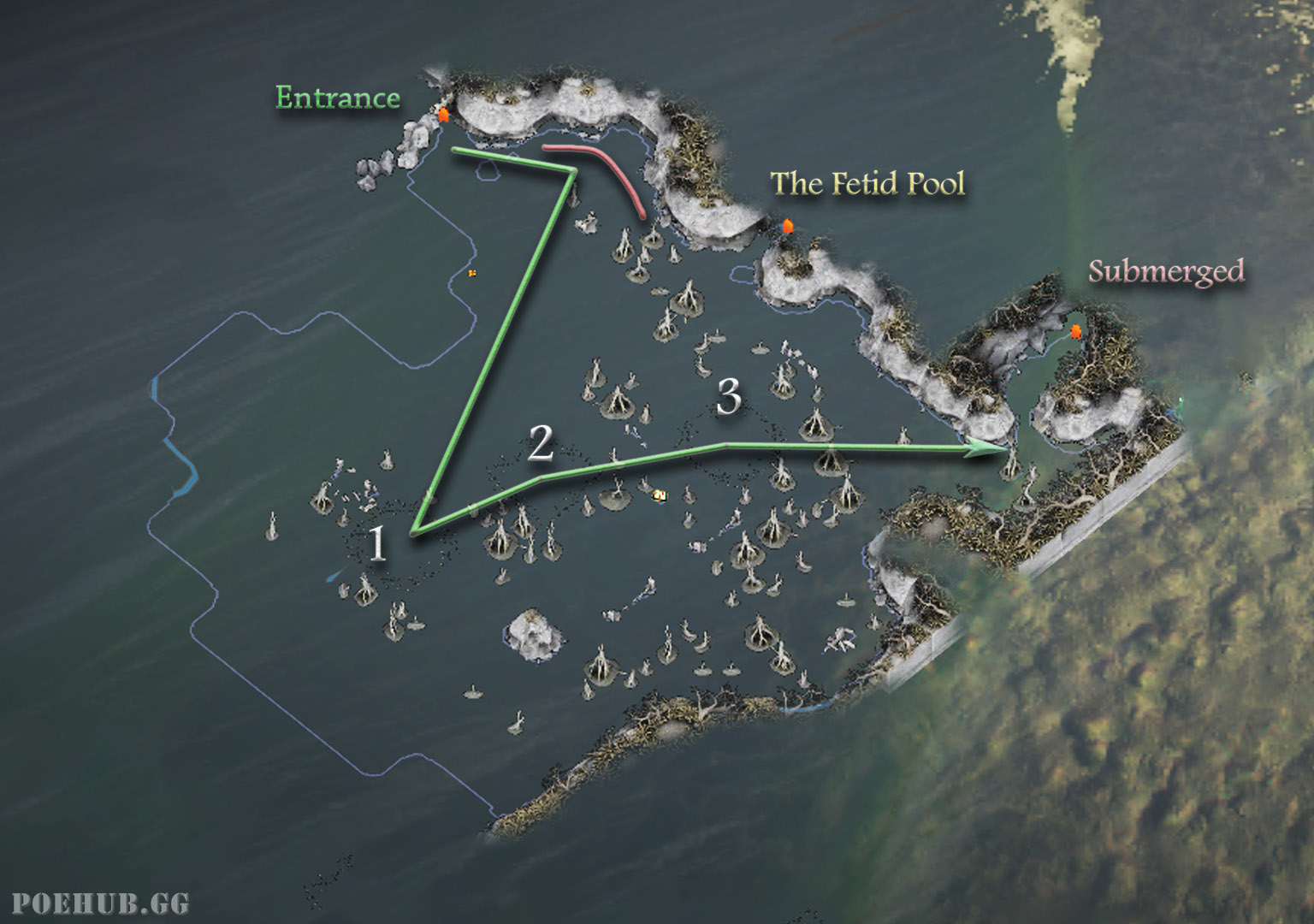 LeftBottom is named based on the entrance being on the left corner of the area, and the exit being behind a corner you have to circle around to after getting the 3rd glyph. 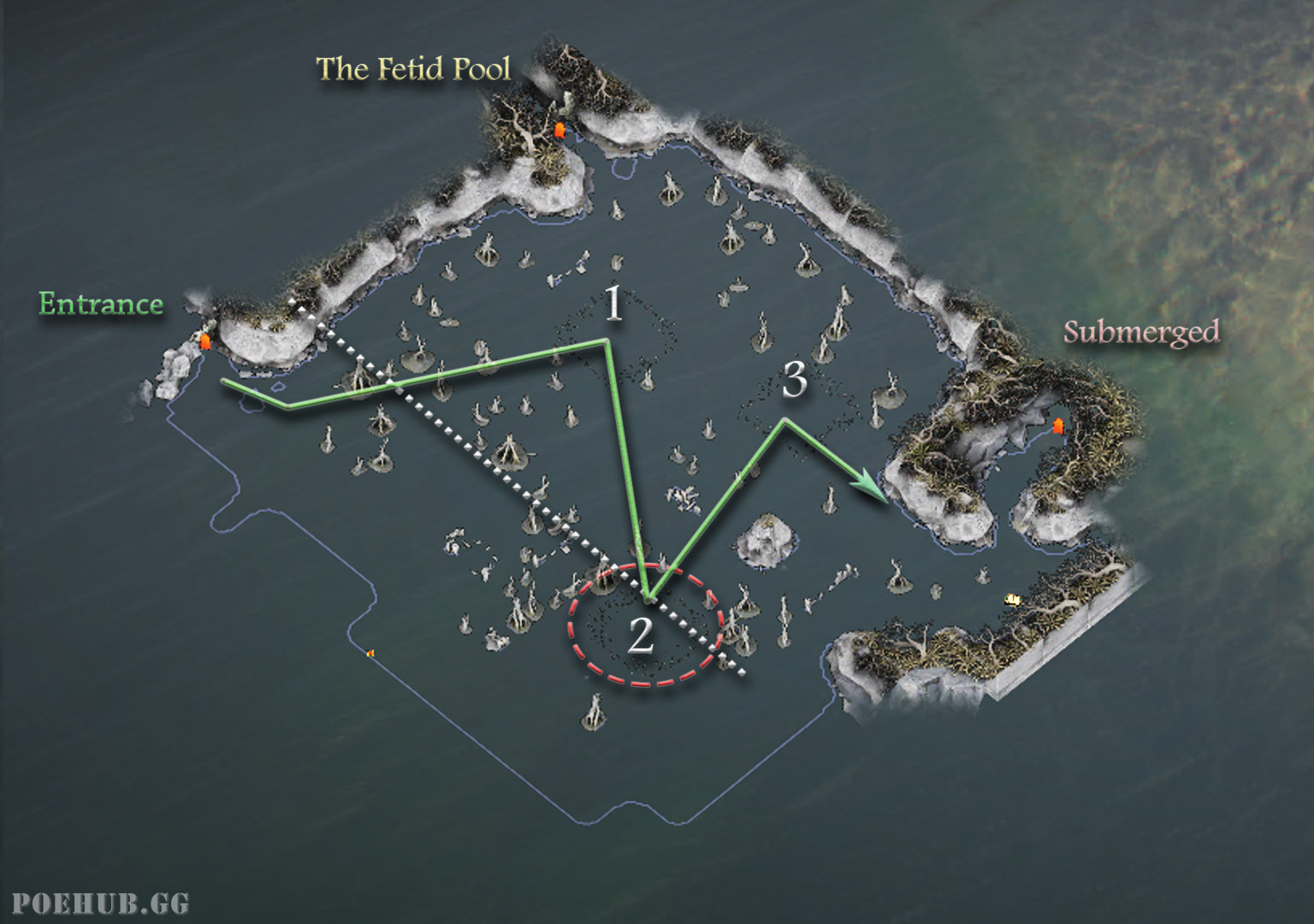 LeftTop is named based on the entrance also being on the left, however in this layout the exit is North-East of the third nest. 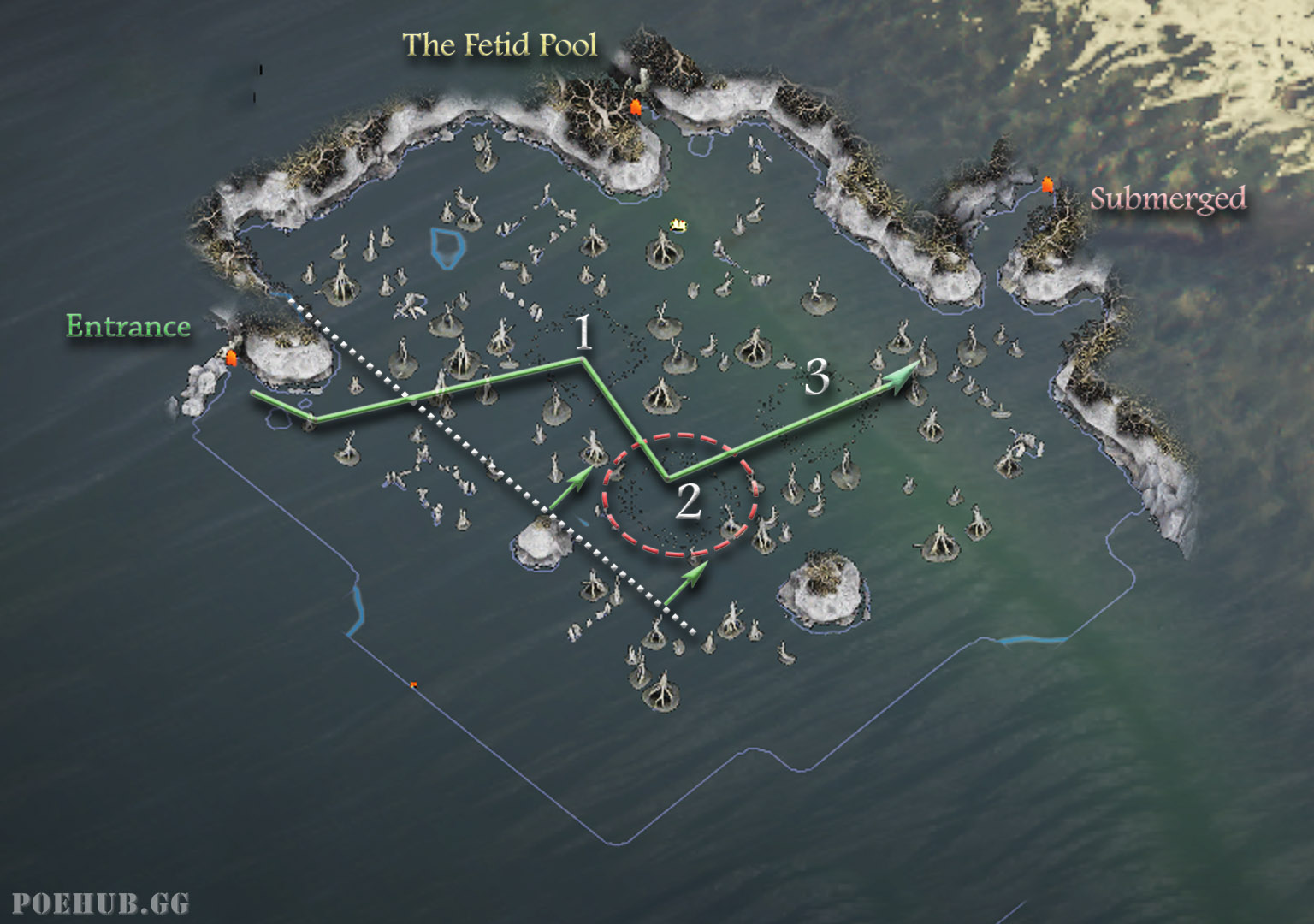 The layouts where you start at the bottom of the instance with the Up orientation are the most likely the ones you'll be making more mistakes in due to them looking quite similar while actually having 3 different exit locations, and one layout itself has 3 different variations that you kind off have to learn to recognize.

BottomLeft layout has had it's name given by the exit to being to the far left corner. 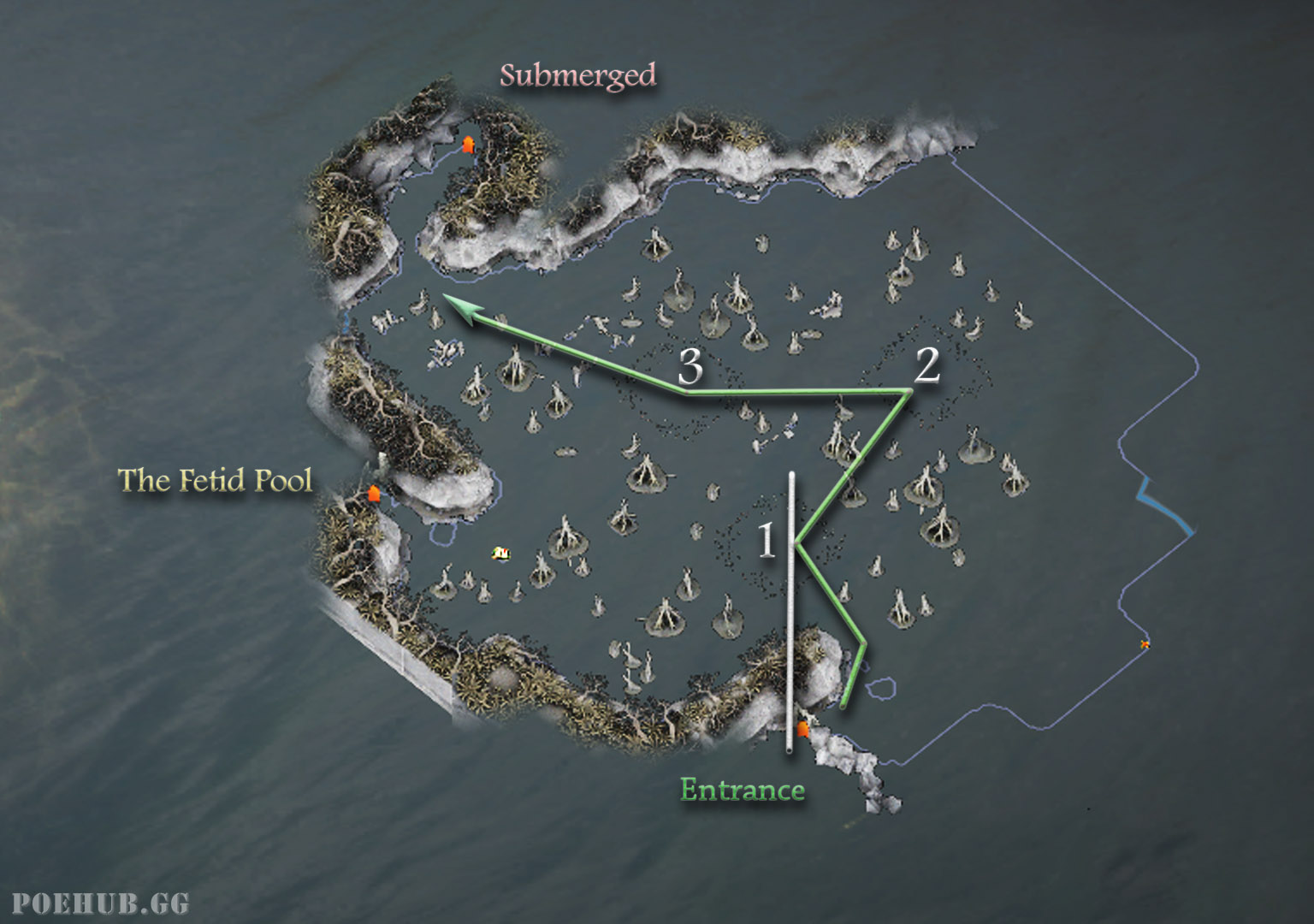 BottomMiddle's exit is between the 2nd and 3rd glyph in the center of the wall. 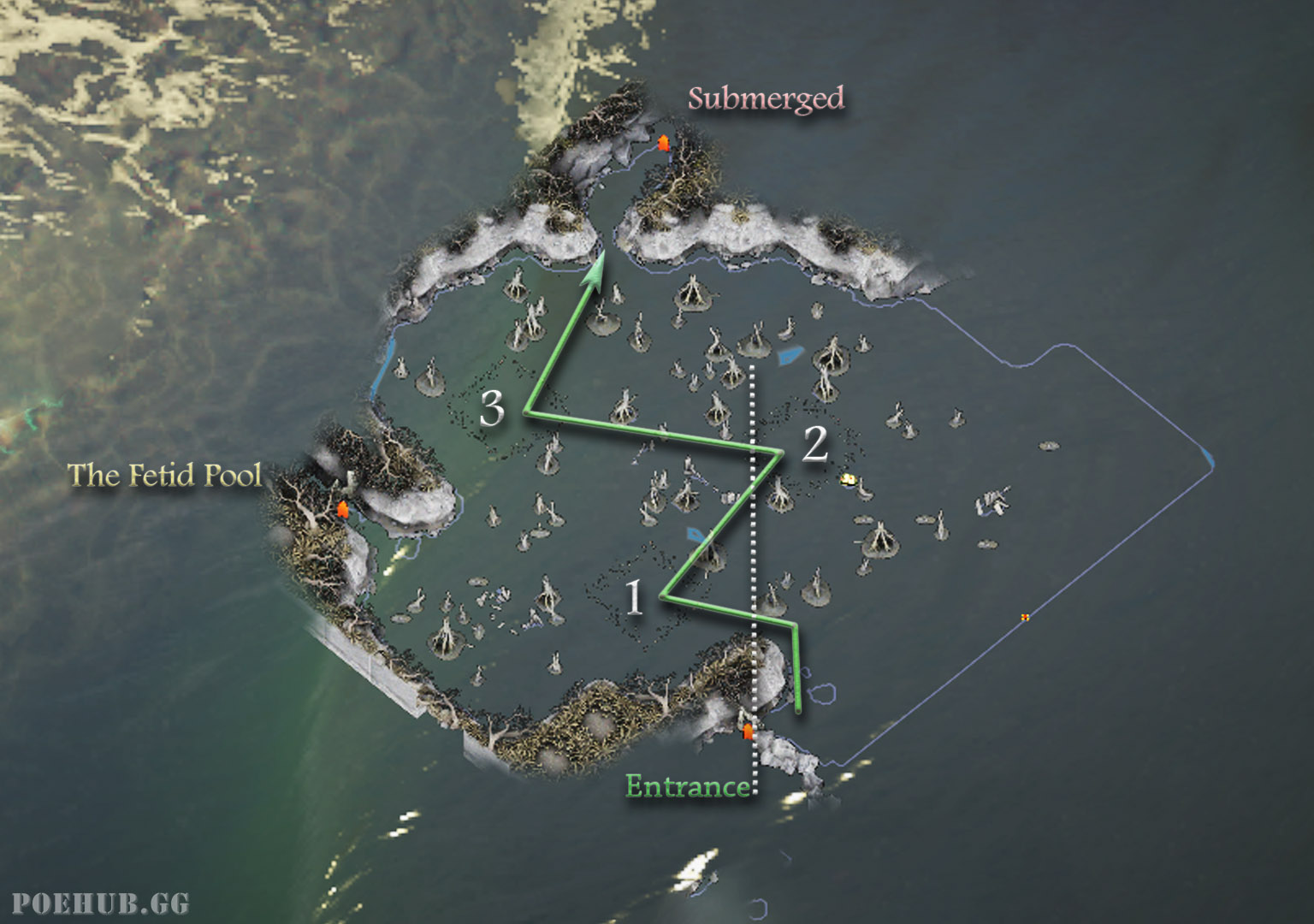 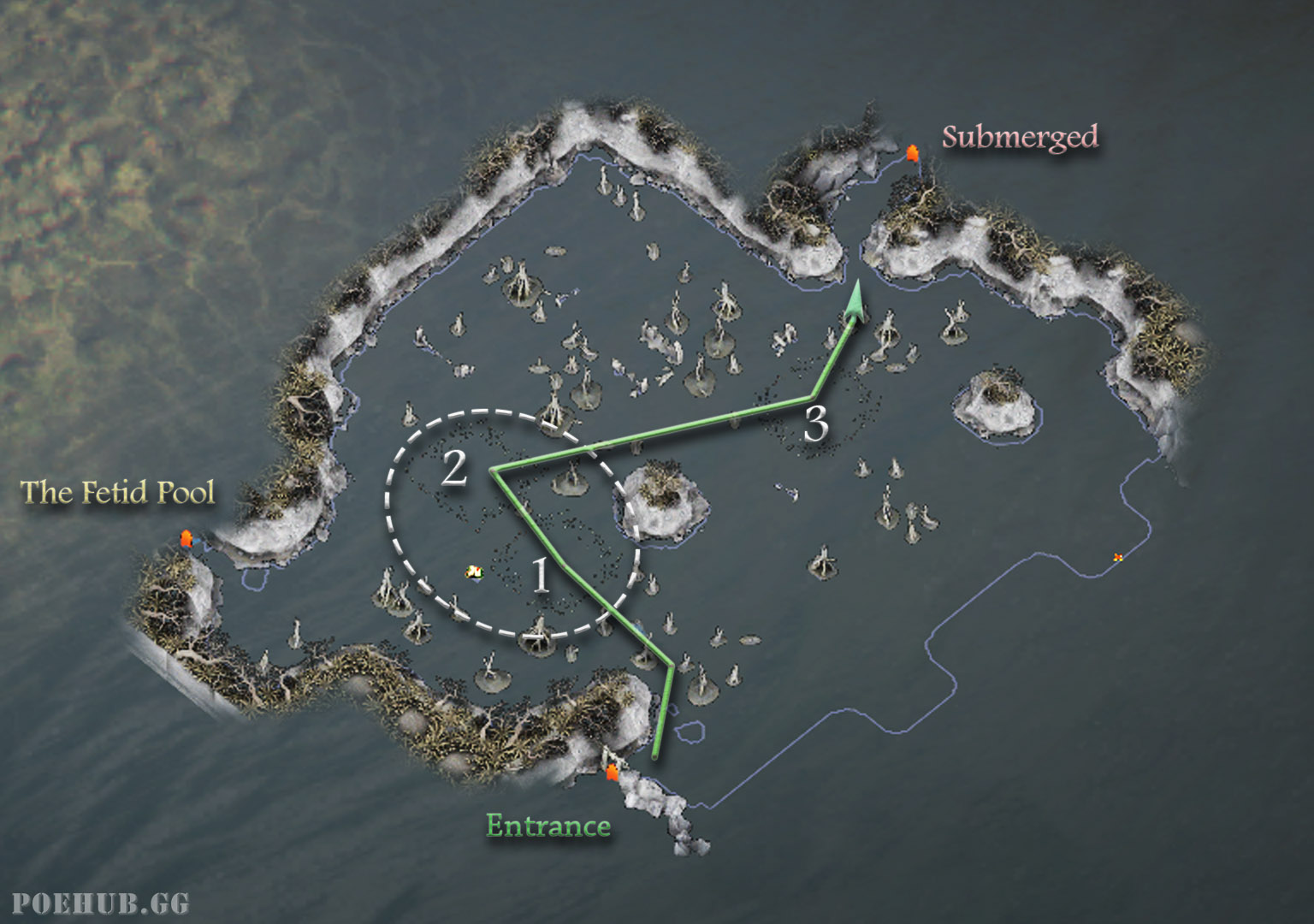 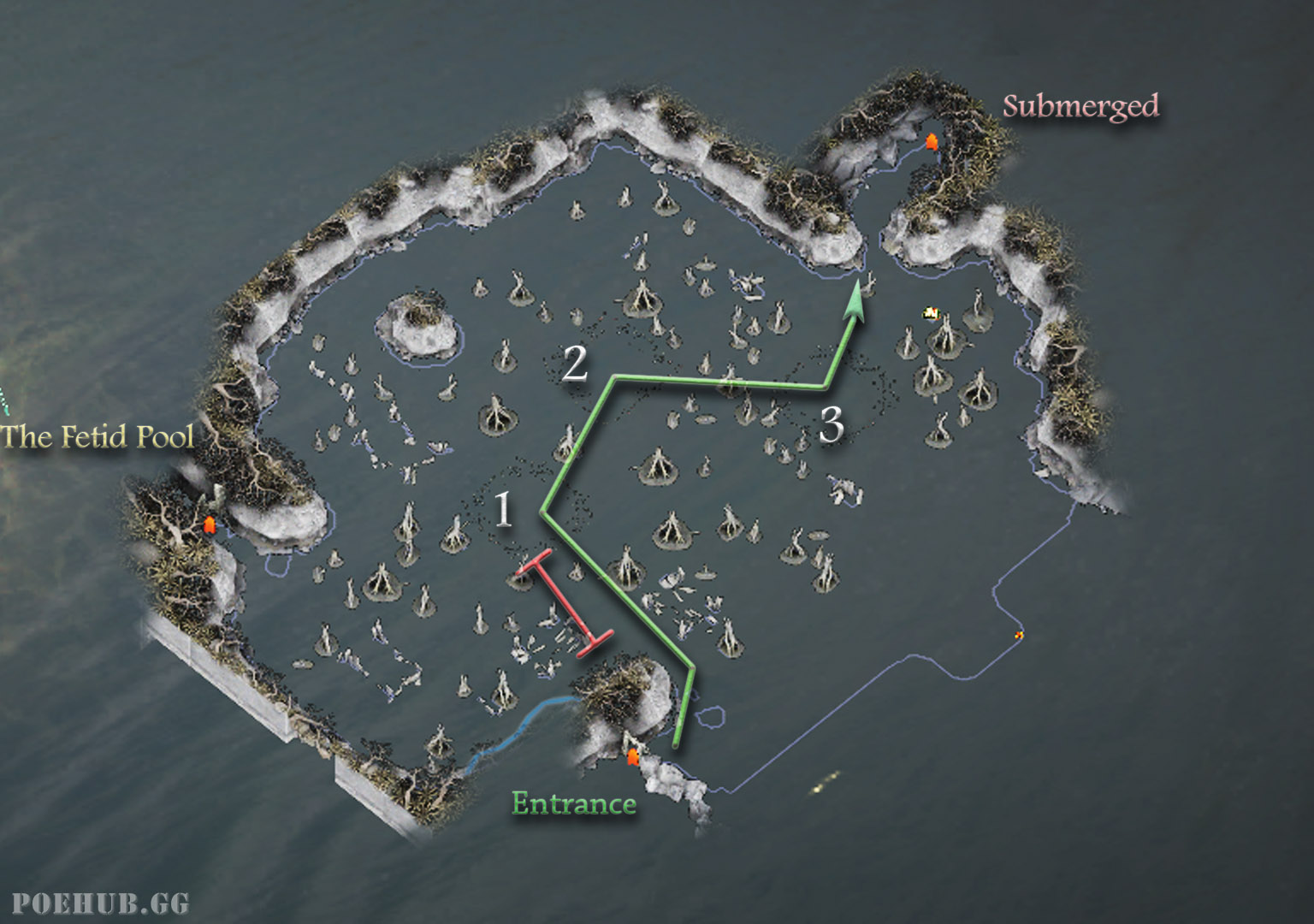 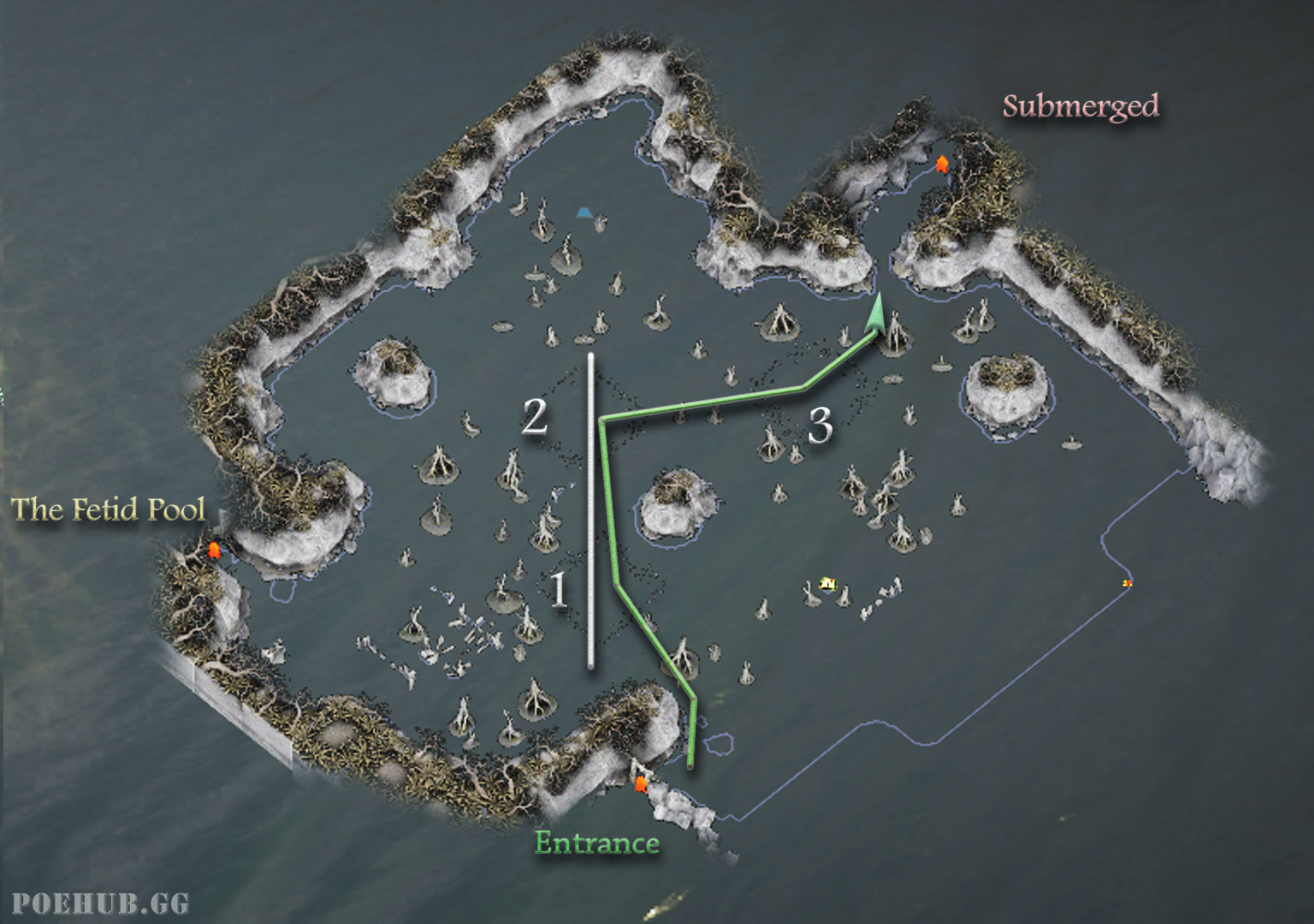 Go to The Fetid Pool

Go to The Submerged Passage